This image was taken while on a recent trip out to Hackfall Woods up in North Yorkshire. The woods are absolutely stunning and well worth exploring. If you like a nice stroll and you enjoy nature, this place ticks all the boxes. Great for kids and family days out. Awesome for exploring in terms of photography.

On the day that I was there the sun was beating down relentlessly. It was extremely bright. Not at all displeasing, but such conditions are not necessarily ideal for photography. In such conditions you can tend to get harsh and contrasty elements in your imagery, dark shadows against extremely bright areas of reflected sunshine. That said I was undeterred. I took my tripod and searched for a good place by the side of the River Ure. Upon finding an ideal spot, I settled in to find a pleasing composition.

The river was flowing fairly quickly, even though in this image it looks serene. There is a reason for that. My intention was to flatten out the water by taking a longer exposure. This would enable me to get rid of some of the texture created by the fast flow of water. In essence, I wanted to make the water a little more flat and glassy looking. I also wanted to blur out and soften some of the harsh, contrasty shadows that I mentioned that were being reflecting back off the water. In order to accomplish this I put a 10 stop filter on my lens which enabled me to attain a longer exposure time, even in such bright conditions.

The composition that I made may seem fairly simple at a glance but it was certainly thought about. I spent some time moving up and down the river looking for the ideal place to seat the tripod in order to capture a shot worthy of this beautiful place. I deliberately included those beautiful budding branches that were dipping into view on the left hand side of the image as they and reached towards the water, juxtaposing them against the vanishing point of the river as it swung off around the corner. A simple shot in many ways, but I do love the composition which I will discuss in a little more detail below. 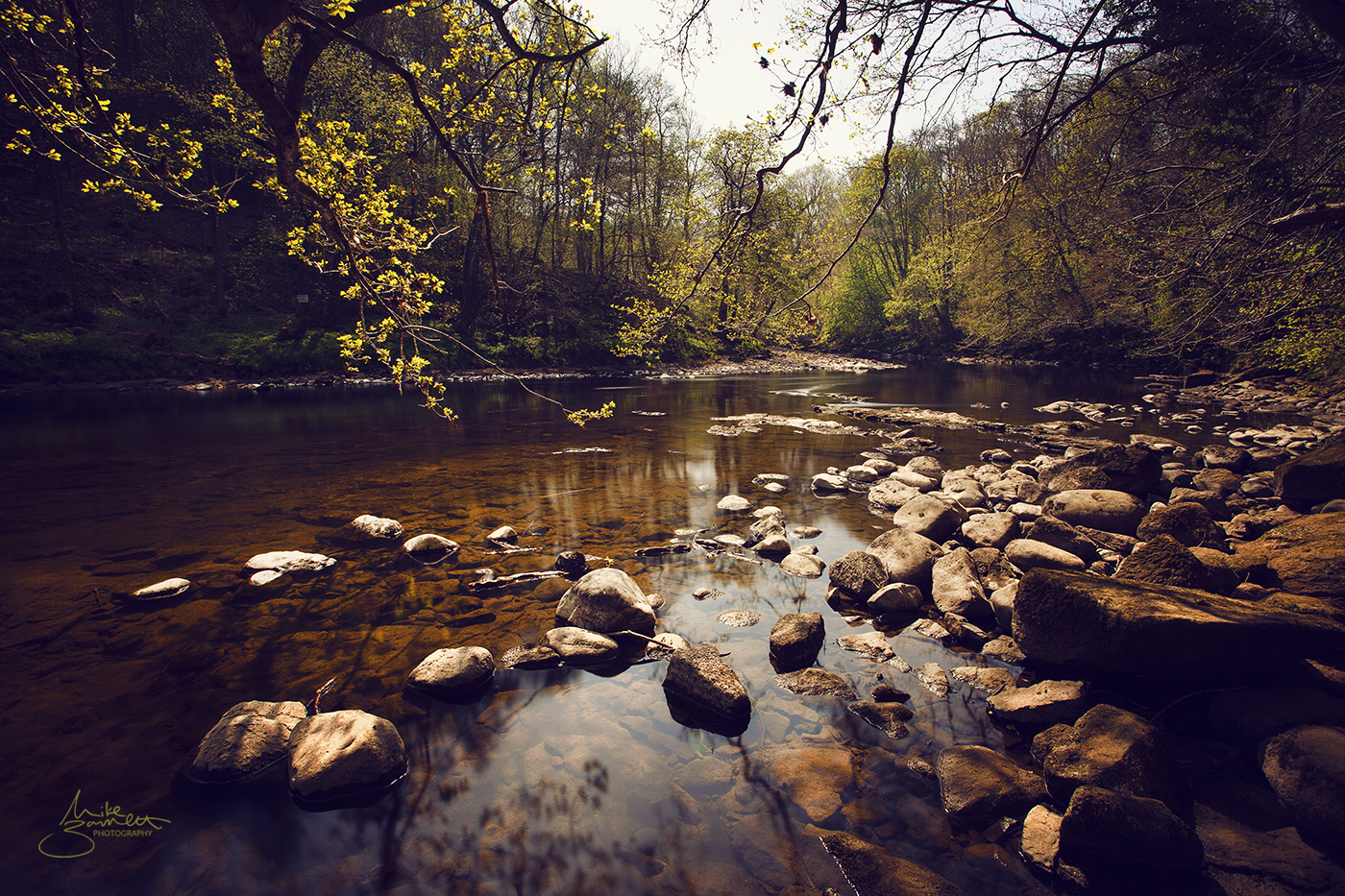 First of all I used the rule of thirds fairly loosely by separating the trees and foliage from the body of water. The white line in Figure 1 below doesn’t quite come in exactly on the third, but it works well enough to separate the weight of the image between these two separate elements, as you can see. I am always of the opinion that the rules that exist in photography are there to guide you more than stick to rigorously. The image has to make sense in its own right and sometimes bending the rules slightly can make an image, not detract from it. You get a sense of what works while on location. It becomes instinctive over time.

You can also see that the white line in Figure 1 separates the image in such a way that what is left both above and below the line almost works as a stand alone image in both cases. Almost! 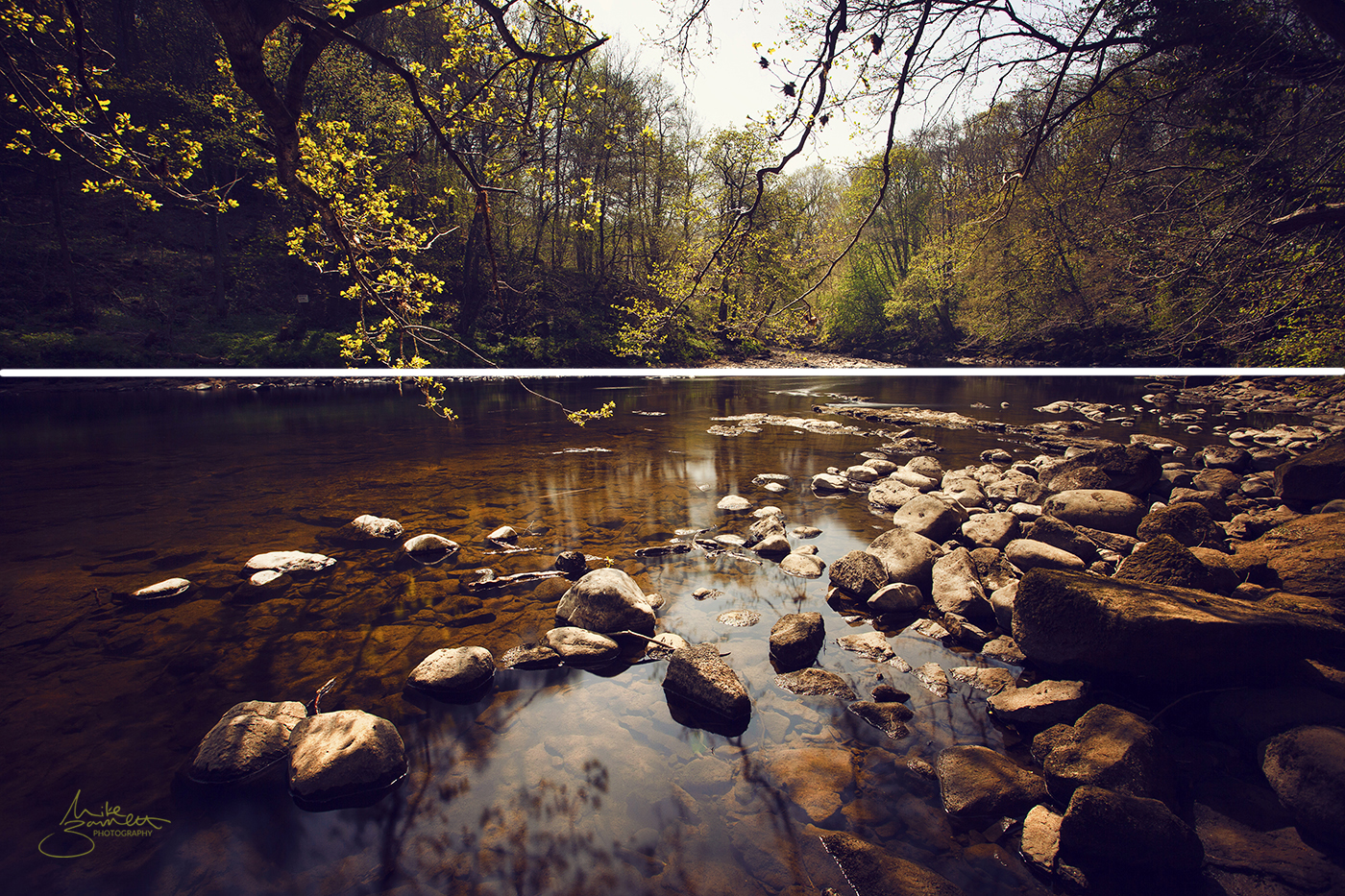 The other detail that became apparent to me when making this composition was the two areas that I have outlined in red in  Figure 2 blow. It is quite simply a triangle shape which has been formed by the top of the tree line and then reflected in the water below. This aspect of the composition draws the viewers eye into the image in a subtle way. It is detail like this that can be so important when making decisions about setting up a shot and recognising subtleties in the landscape around you. That’s why it is always a good idea to take your time to scan the scenery to see if you can pick out quirky characteristics that are naturally occurring in the landscape around you. Look for reflective elements both in a literal way and also in terms of shapes and forms that may relate to one another within the field of view. 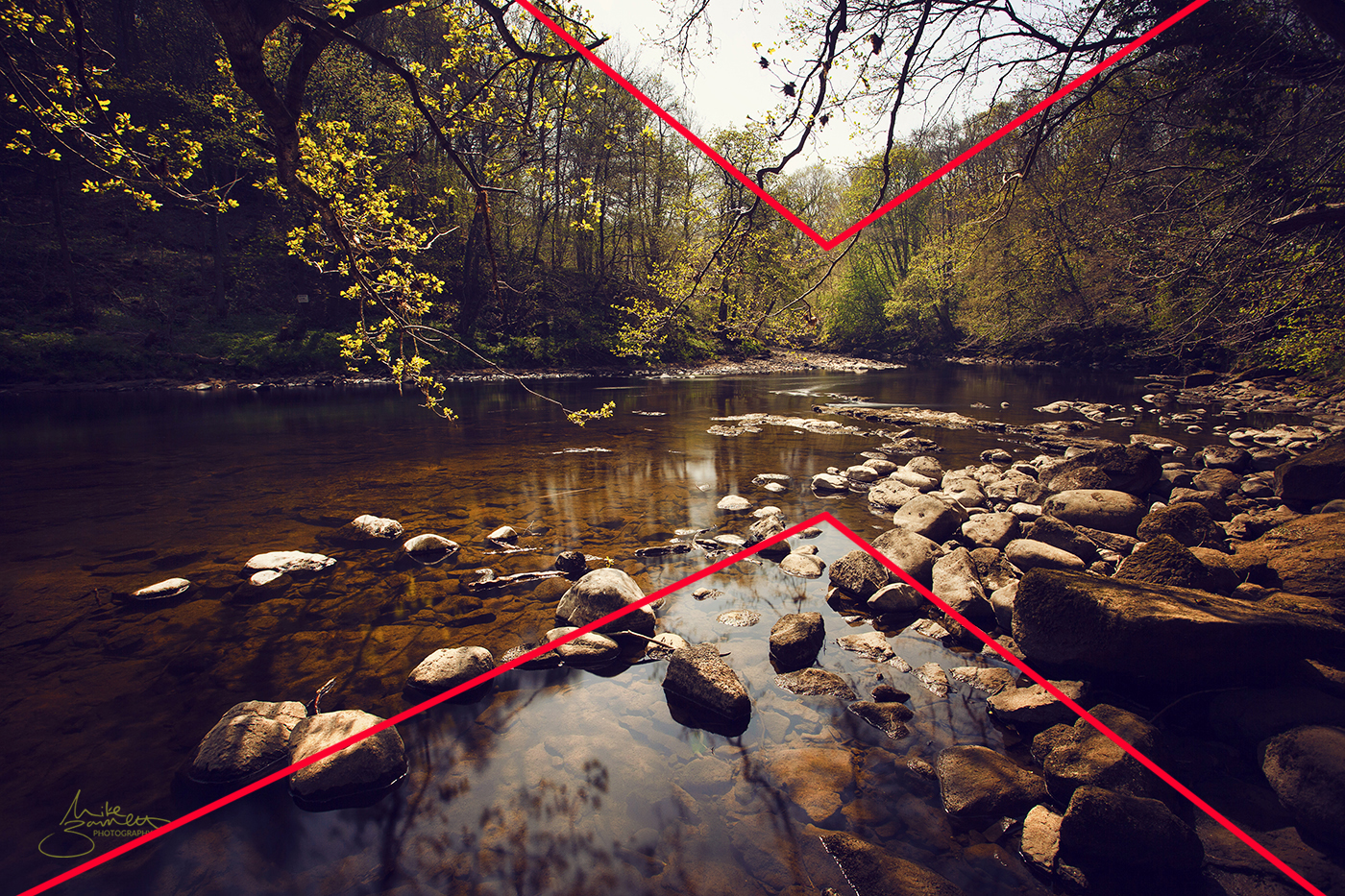 Considering how the perspective of this composition works, there is also a vanishing point where the river disappears around the corner. From the point where this occurs I have drawn these green lines onto Figure 3 below illustrating how each separate triangular portion draws the viewer’s eye off in multiple directions reaching all extremities of the photograph. This aspect of the photo also leads the viewer’s eye into the image much like the reflective triangle shape, but it also takes the viewer on a journey around the whole image making each separate component of the photograph as important as the other in terms of achieving something that is both aesthetically pleasing and well balanced concerning the overall composition. 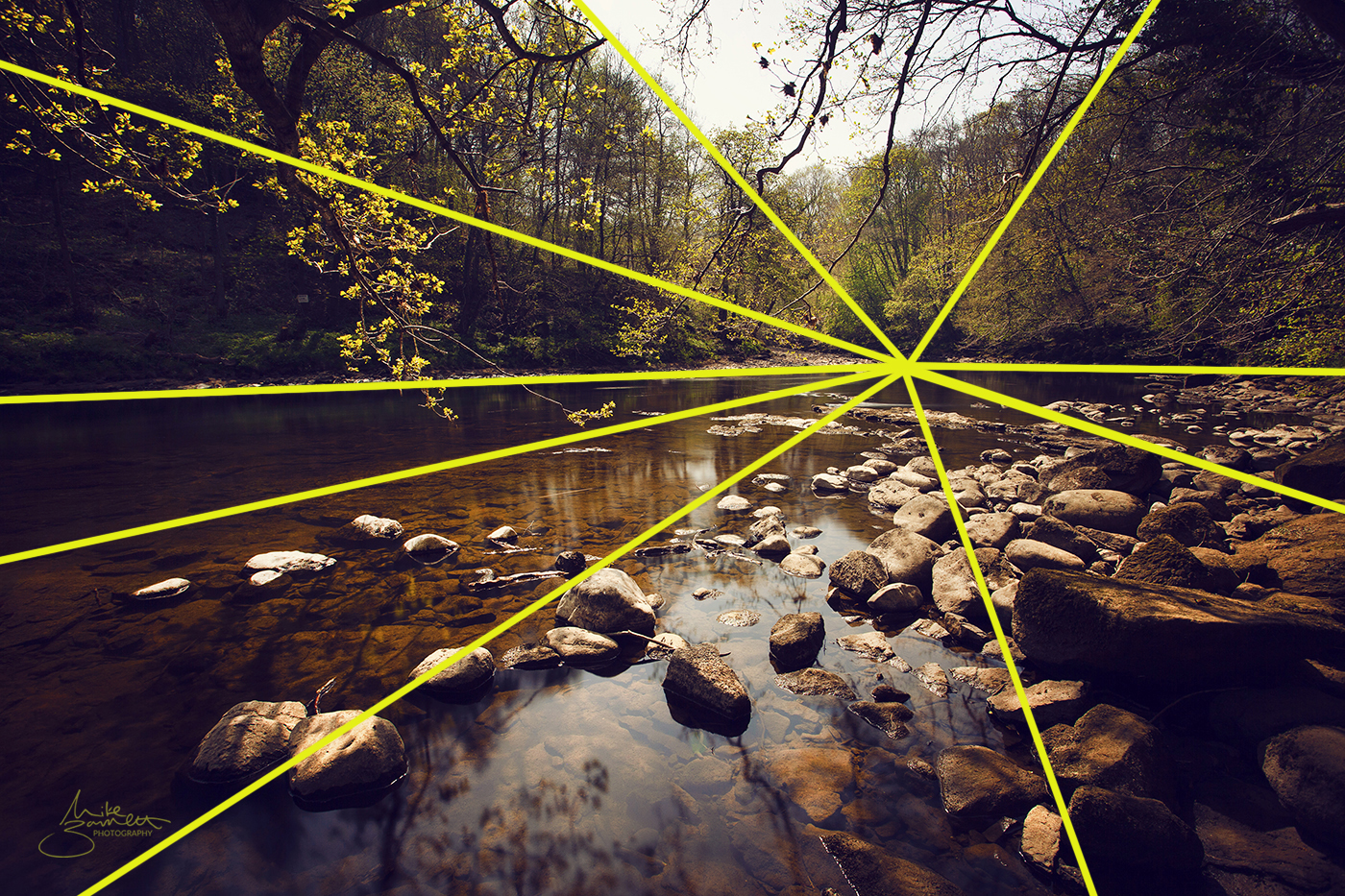 Lastly, when you lay the golden ratio over the top of this image as seen in Figure 4 below you can also see how it works in terms of weight and balance, even though the focal point isn’t necessarily true to the ratio, the suggestion of where the image is drawing the viewers attention is very apparent. 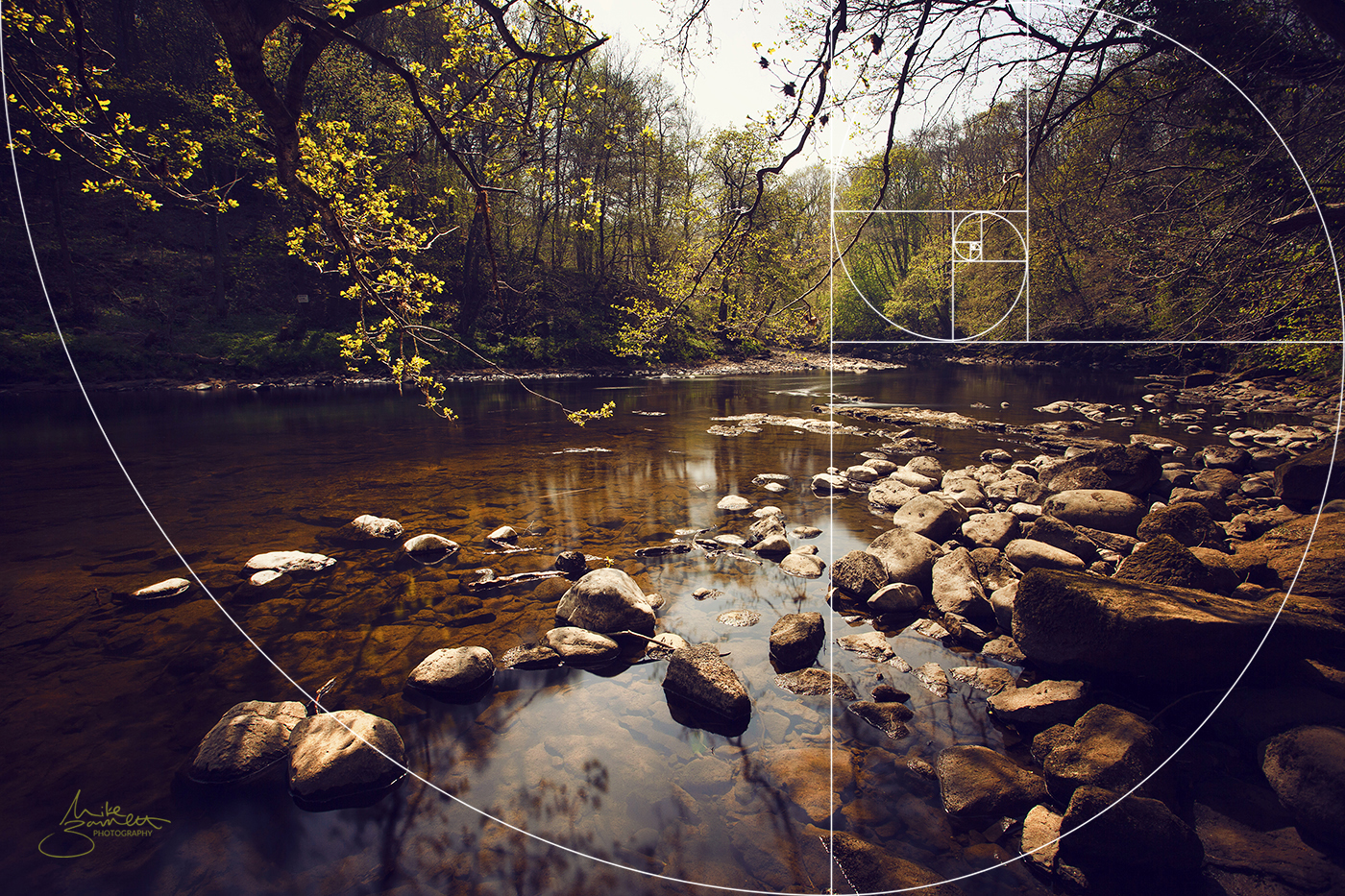 Landscape photography is very much about taking the viewer on a journey and engaging the onlooker by creating imagery that evokes an emotional response. Good landscape photography is not only creating something that is aesthetically pleasing, but also making a record of the time, the place, the season, the weather, the colours and/or various hues that are occurring and indeed in the telling of a story. All of these elements can be achieved with a little bit of awareness and consideration. Taking time to look and truly see what surrounds you is critical. Finding balance, elements of interest, leading lines, aspects that visually echo or repeat or give the sense of distance or depth of field, things that draw the eye or that can be juxtaposed against each other can all be components the go towards making an image work and be intriguing.

A friend said to me many years ago and I quote “Beauty can be found in the small and mundane as well as in the mighty monuments of life”. That sentiment has always stuck with me. We are surrounded by beauty and yet don’t always see it or appreciate it. But when you start looking at things with a critical eye and certainly with a modicum of passion, you will find all sorts of intriguing and stunning imagery. It’s literally everywhere. Photography for me is about wanting to capture and ensnare the beguiling, the beautiful, the quirky and things that occur in the moment. I want to create imagery that endures and intrigues.